On 25 March 2015, the Japanese Maritime Self-Defense Force (JMSDF) commissioned the JS Izumo (DDH-183), lead ship of her class and the largest surface combatant of the JMSDF. Designated as a helicopter destroyer, the Izumo-class was built as an anti-submarine warfare (ASW) platform. With this new ship reinforcing the Japanese arsenal, the Chinese quickly considered the ship as a “war potential“, claiming that she was an “aircraft carrier in disguise“. The ship indeed bears a strong resemblance to an aircraft carrier, just like the previous Hyūga-class.

In fact, what the Chinese are fearing is the offensive capabilities the ship could possess. These two countries share an old rivalry which grew even stronger after China’s impressive naval build-up and the political conflict over the Senkaku islands. So Chinese officials feel like the ship was built primarily for direction against China, and not only regarding ASW. So what is it all about? This article by Menetrey Yann from Switzerland, a guest author for Defencyclopedia, explains it in detail. 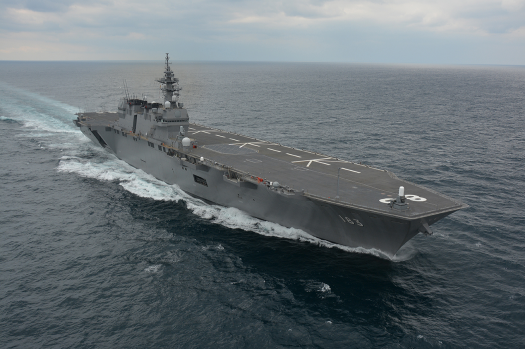 The restrictions imposed by the Japanese Constitution have (obviously) decided of Japanese weapons’ role and applications. But is the ship built to project power or dedicated to ASW? Let’s take a deeper look into the true purpose of the Izumo-class. Displacing 24’000 tons at full load with a 248m long and 38m wide flight deck, the ship can accommodate 14 helicopters (official number). However, considering her size and the large hangar, I think 28 helicopters is a more likely figure. The air complement would be composed of Mitsubishi SH-60K for anti-submarine duties and MCH-101 which is used by the JMSDF for both mine countermeasures, search and rescue, and transport roles. Since Japan recently ordered five V-22 Ospreys (could be increased to seventeen), it is likely that the aircraft will operate from the Izumo-class. 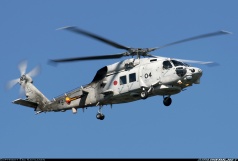 The successful deployment of a USMC Osprey aboard the JS Hyūga (DDH-181) in 2013 demonstrated the feasibility of the operation. The Chinook can be easily operated from this ship and its ability to carry 55 troops will be a big advantage during amphibious operations. During peacetime, the heavy lift capability of the Chinook will be invaluable in disaster relief operations.  The SH-60K will take over the ASW duty with its dipping sonar, sonobuoys and torpedo armament. But the ship’s own armament is “only“ composed of close-in weapon systems with two Phalanx and two SeaRam. In that aspect, the Izumo-class is less prepared for ASW operations than her predecessor, the Hyūga-class, which is fitted with a 16-cell VLS equipped with twelve RUM-139 ASROC, and two triple 324mm Type 68 torpedo launchers.

Because it is built to operate helicopters and not aircraft, the Izumo-class could only serve as an STOVL carrier (Short Take-Off and Vertical Landing), and it won’t go far without major improvements. Realistically, the ship is too small to be a CATOBAR or STOBAR carrier. Even if it wasn’t the case, the ship would require an extensive refit to be turned into one of these two types (Example: Conversion of Admiral Gorshkov into INS Vikramaditya). Today, only two V/STOVL aircraft could be potentially operated by the JMSDF: the old and battle proven Harrier or the new Lockheed Martin F-35B Lightning II. Both aircraft would require a ski-jump to reduce fuel consumption, thus increasing the range. Since the ship lacks such feature, the aircraft would have to take-off vertically or perform a rolling vertical takeoff/short take-off. If fully loaded, their already short range would be further reduced. Also, considering the Izumo’s size, only 10-12 aircraft could be deployed aboard. A shorter ranged fighter means the carrier must be closer to it’s objective. In the scenario of a war against China, the Izumo would thereby sail close to the Chinese shores, well in the range of Chinese land-launched anti-ship missiles. In conclusion, Japan would only have a weak and vulnerable striking force.

The side elevator on the Izumo 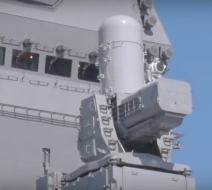 The SeaRam CIWS on the Izumo

The F-35B would logically be the first choice of the JMSDF if it wants to gain an air projection capability. The media immediately thought the aircraft would be seen aboard the Izumo. However, Japan has shown no interest in this variant and already ordered five F-35A with a total of 42 planned as a replacement for the aging F-4EJ fleet. There is no sign of a potential contract for the F-35B. Even if such thing occurs, the Izumo-class would still require an extensive and expensive refit. It is hard to find precise information, but I believe the elevators are similar to the ones on the Hyūga class. The forward elevator is by that matter not large enough to accommodate a fighter and can’t be modified because of its position at the center of the deck. Thus, only the rear elevator could carry the F-35B from the hangar to the flight deck and with major modifications. Relying on a single elevator would greatly slow air operation aboard the ship.

An Italian Harrier taking off from a ramp

To improve the operational capabilities of the F-35B, a ski-jump would also have to be fitted. Another important feature is the deck. Since the Izumo class is supposed to operate helicopters, the deck isn’t made to sustain the heat of a turbofan. The addition of a heavy and expensive heat-resistant deck coating to sustain the massive thrust and heat produced by the F-35B is required. Also, Japan neither has a single fighter pilot capable of carrier operations, nor the personnel to operate a fighter on a carrier. Like China is currently learning, to master aerial operations at sea requires experiences and intensive training. Even if Japan will surely receive help from the United States (and perhaps Britain), it would take a decade for the JMSDF to gain such capability. In its actual state, the JS Izumo is by far not ready to become an aircraft carrier and will remain as a helicopter carrier for anti-submarine warfare.

Given the above, the Izumo-class isn’t “war potential“ as it has very limited if no offensive capabilities. Considering the important Japanese naval defense perimeter, the Japanese could avoid their Constitution by designating the Izumo a “defensive aircraft carrier“ providing air defense in the southern part of the Japanese waters. But the most realistic threat posed by the Izumo-class to China is the use of the ship as a Landing Platform Helicopter (LPH) for amphibious operation. Available information indicates that the ship has a crew of 470 but enough extra space to accommodate 970. Thereby, 500 soldiers can be transported aboard, and probably more during short deployments. 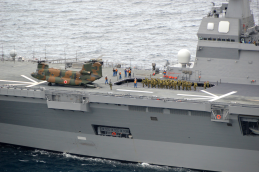 CH-47J Chinook of the JGSDF 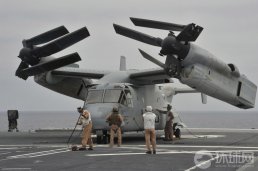 MV-22 Osprey during trials with the Japanese Navy

Because the ship was also designed to serve as peacekeeping and disaster relief operations, it is a versatile platform. The Izumo lacks a well-deck giving it limited capabilities for amphibious assault, but it could potentially carry every helicopter used by the Japanese Ground Self-Defense Force (JGSDF) such as the attack helicopters AH-64DPJ Apache and AH-1S Cobra, the scout helicopter OH-1 or transport helicopters like the CH-47J, UH-60JA, and UH-1J. As already said, the V-22 Osprey could also easily serve in the troop transport role for amphibious operations. 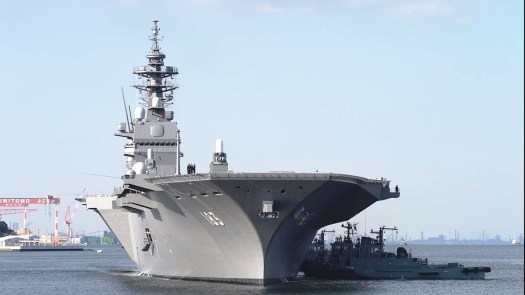 The Hyūga-class has already demonstrated its capabilities as an LPD, there is no doubt that the Izumo is as capable as its predecessor. The Izumo-class is thereby not posing a significant offensive threat to China, or at least not more than the already existing Japanese amphibious force which has always been directed in defensive actions. By that matter, the Izumo is no way an aircraft carrier in disguise at present. In fact, it’s ASW helicopter capability is the biggest threat to the growing Chinese submarine fleet and not it’s ‘potential’ to carry jets. Dozens of ASW helicopters operating off this ship is what the Chinese would dread in an actual combat scenario rather than a handful of fighters.

If you enjoyed this article by our guest author, do rate it below!

26 Replies to “The Japanese Izumo-Class: An Aircraft Carrier in Disguise?”