The French are the only ones in Europe who are almost self-sufficient in producing high quality military vehicles, firearms, ships and aircraft and weapons. Their products have been exported worldwide and have been the star in several major wars. In this article, I will document the top 10 weapons which are used by the French military based on their technology, quality and success in conflicts. I won’t be going deep into the technical aspects of any of these systems and this article is meant as a guide to some of the best weapons made and used by the French.

Only 2 countries in the world have developed a self-propelled, self-contained SAM system capable of firing radar guided missiles, France and Russia. The Crotale is a short range SAM system which can be mounted on a tracked chassis or on a 6×6,8×8 wheeled vehicle. This mobility, combined with 8 containerized missiles, a search and tracking radar, provide the French forces with an easy to deploy and powerful air defense capability. One of the biggest advantages of this system is that it is transportable in the C-130, A400M which allows for quick deployments in hostile regions. The self-contained nature of this missile system makes it deadly in combat where it can shoot its missiles using data received from other sensors and then go back under cover. Variants are mounted on French frigates and the Chinese have notable reverse engineered this missile from the few examples they legally acquired.

France is the third country in the world after the US and Russia, to develop and deploy long range Land Attack Cruise Missiles on its warships. The Scalp missile is a 1000+ km range missile launched from the A70 VLS and has a 450 kg warhead. 16 cells of Scalp equip the FREMM frigates of the French Navy. When this frigate is deployed with a carrier Battle group, it forms a very important land attack platforms with its scalp missiles.

The Scalp is flexible and is designed to be fired from the Rafale as well and this variant is called Storm Shadow. This allows France to attack hardened shelters, Air defense sites and high value targets hundreds of kilometers inland. The Rafale can carry 3 Scalp missiles in a max configuration. 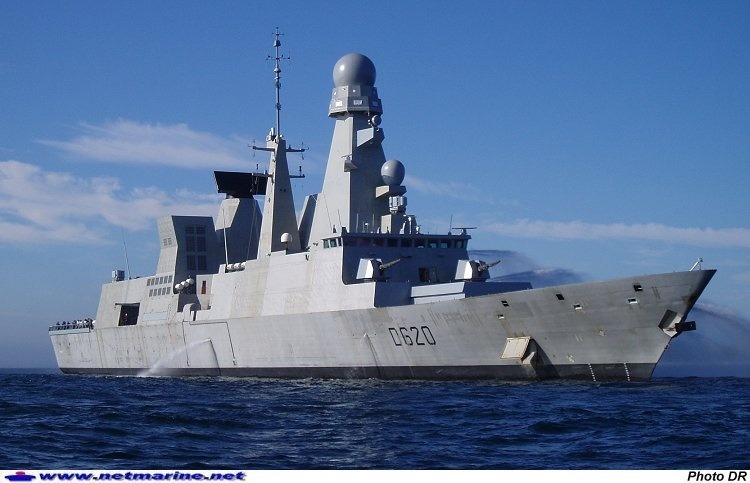 The Horizon program was a joint venture between UK, France an Italy to develop a common next generation Air Defense Destroyer. But after the UK dropped out to pursue their Daring class, France and Italy carried on with the program and 4 ships were a result of this. France operates 2 of these powerful destroyers. It is referred to as frigates, but in terms of displacement and armament, they are definitely destroyers and the frigate term is purely political.

The distinct piece of equipment on these ships is their primary EMPAR multifunction G-band AESA radar and their secondary Thales S1850 volume search AESA radar. These ships are equipped with 48 A50 VLS cells for a mix of Aster-15/30 missiles. The range and capabilities of these missiles enable these ships to maintain an air defense bubble of radius 150 km around it. These ships form a part of the French carrier Battle group and provide primary air defense. They also have surface warfare and anti-submarine warfare capabilities. 8 Exocet Anti-ship missiles are carried behind the superstructure in angled box launchers. 4 torpedo tubes and an ASW helicopter form a potent defense against submarines. The gun armament consists of 2x76mm super rapid guns which can be used against air and surface targets and 2×20 mm cannons. The Sadral forms the CIWS component of the ship.

These highly capable destroyers are small in number and only 1 will be available for deployment at any point of time. But they will form the most important component of French naval operations.

This is a new generation LHD (Landing Helicopter Dock) of the French Navy which gives it a very powerful amphibious assault, troop transport and humanitarian relief capability. It is 200m long and displaces 21,000 tons. It has a capacity to embark 16 medium helicopters (NH-90 size) in a standard deployment although this number can be increased to 24 by a using light/medium helicopter mix or 35 light helicopters. This large helo carrying capacity enables it to act as a flagship for ASW missions. It has a huge cargo hold which is used to carry Tanks, Armoured Personnel Carriers, Trucks and Howitzers. Around 800 troops can be embarked and ship to shore transport is provided by LCM (Landing Craft Mechanized) and AAVs (Amphibious Assault Vehicles).

Self-defense of such a large warship carrying a huge quantity of troops, helicopters and military vehicles is very important. But it is somewhat lacking in this category (compared to the heavy defenses on USN LHDs). It carries 2x30mm guns for defense against small surface threats and 2 Simbad launchers carrying 2 IR guided ‘mistral’ SAMs of 4 km range. During the recent Libyan conflict, this ship proved its usefulness and versatility when it based several attack and transport helicopters. The attack helos were used to carry out precision attacks with ease as they were forward deployed on this safe carrier.

Its reputation got a boost when Russia, a country which always builds its own warships, ordered 2 Mistral LHDs. It has a very bright export prospect with other nations as well. India could end up being its biggest customer if Mistral manages to win the tender for 4 LHDs.

The Charles de Gaulle holds the distinction of being the only nuclear powered aircraft carrier outside the US Navy. It may not be the largest carrier in the world at 250 m and 40,000 tons, but it’s the most powerful carrier in its category. It carries a mixed air wing of Rafale-M and Super Etendard fighters, E-2 Airborne Early Warning aircraft, NH90, Gazelle and Puma helicopters which enables it to project power for hundreds of kilometers around it, thousands of kilometers from French soil. In fact, it is the only European carrier which is participating in NATO ops from the past few years as other European nations lack a credible carrier force and it will continue to do so for decades to come

The Leclerc is an ultra-expensive, well-armed and high tech tank made by AMX for the French army. This formidable tank has a 120 mm main gun with 46 rounds of ammunition, a co-axial 12.7 mm gun with 1100 rounds and a 7.62 mm gun with 3000 rounds. This powerful arms package is packed into a tank which is very well protected against modern threats. The initial batch of Leclerc’s have a welded steel hull with modular armor. The latest batch has composite armor with titanium plate inserts and Explosive reactive Armor (ERA) blocks along the sides. This ensures protection from both hollow charge and sabot anti-tank munitions. It has an 8 cylinder diesel engine which makes maintenance easy and reduces the cost of operation when compared to a gas turbine engine. Since it was introduced after 1992, it hasn’t seen any major conflict yet. UAE is the sole export customer of this tank.

The FAMAS is a bullpup design 5.56 mm assault rifle which entered service with the French in the 1980’s. This is the upgraded and modernized version of the humble FAMAS rifle to make it a part of the FELIN combat system for French troops. The improvements include a front grip for better weapon handling, new day/night optical sight, thermal sights, radio, integrated video camera and indirect aiming feature. The most spectacular upgrade is the indirect fire mode which enables the engagement of targets which are not in line of sight while the soldier is maintaining cover. The pics shown below illustrate how exactly the new indirect fire mode will benefit troops and allow them to return fire under attack. According to reports, all the French Army infantry units have now switched to this new weapon.

The Aster is the result of a joint Franco-Italian requirement for a next generation Surface to Air missile for their navy which could be later modified into a land based variant. The result of the project were the Aster-15 ad Aster-30 missiles. The unique feature is that both these missiles are technically same having the same terminal dart. The only difference is the size of the booster which decides the range ad speed of these missiles. The Aster-15 is said to have a speed of Mach 3 and a range of 35+ km. the Aster-30 is said to have a range of 120+ km ad a speed of Mach-4.5. Both these missiles are launched vertically from the A50 Vertical Launch System which is present on every modern French warship. These missiles are capable of intercepting maneuvering supersonic targets at sea skimming level. This make them potent in modern warfare which is dominated by missiles.

This missile has seen spectacular export success with the British being its biggest and most prominent customer. They purchased several hundred Aster-15/30 missiles to equip the 48 cells on each of their 6 Daring class destroyers. The British claim that they have the best air defense ship in the world further highlights their confidence in the capabilities of the Aster missile.

This beauty is touted by the French as an Omnirole fighter and can perform air superiority and precision strike roles with ease. It has an excellent delta wing design with canards and continues the legacy of the legacy Mirage 2000. Its sensors include an AESA radar, optronics, ESM and a spectacular electronic warfare suite in the Spectra which is said to be capable of defeating most modern air defense radar systems. It has 12 hardpoints which are capable of carrying a whole range of Air to Air missiles, Air to Surface missiles, Guided Bombs, Anti-Ship Missiles and the ASMP nuclear missile. This makes it a very potent multirole fighter which can carry out a huge variety of missions. It has seen success in the recent conflict against Libya where Rafale M jets of the French Navy operating from the Charles de Gaulle carried out hundreds of sorties with success. The presence of both Air force and Navy variants further show the versatility of this fighter. Unfortunately due to lack of political weight, France had been unable to secure an export contract till recently. Egypt has placed an order for 24 Rafales . India could very be the largest customer of this fine jet if the deal is signed.

Who can forget the only missile that dented the American and British pride? This missile has a range of 40-180 km depending on the variant and flies just above sea level at speeds of 0.8 Mach.  The Exocet managed to expose gaps in the defenses of the US and the Royal navy and proved to the whole world that a small missile which is relatively cheap to obtain, can be fired from land and air to disable expensive modern warships. Such was the impact of this missile that the Russians started to work on developing a small missile with similar performance. Currently, upgraded variants of this missile are in frontline service around the world. It can now be launched from Ships, fighter jets, Submarine, helicopters and land based truck launchers. This makes it easy to conceal and very flexible. The Mirage and Rafale along with the Atlantique, have been fitted with the Exocet to be used in maritime strike role. Recently, the Puma helicopter was being integrated with the full range helicopter launched variant which will enable it to carry 2 missiles . 8 Exocets are fitted on each of the Horizon, Lafayette and Fremm class of warships. The Rubis, Scorpene and the Agosta class submarines can deploy the underwater launched variant of the Exocet from their torpedo tubes. Having a stellar combat record and being extremely flexible and deadly, this is definitely the number 1 spot in the list of Top 10 French weapons.

If you enjoyed reading this article, do rate it below

TOP 10 MOST POWERFUL WEAPONS OF THE ISRAELI MILITARY