In this weekly news digest by Defencyclopedia, we bring you the most recent and relevant happenings in the world of defense. Each report will have our analysis and opinion about it.

The Israeli Navy’s surface fleet will get a shot in the arm with the purchase of 4 new corvettes, a modified variant of the Meko 80 patrol ship, from Germany. Unlike the basic 2000 ton Meko 80, the Sa’ar 6 will be heavily armed, similar to its predecessor, the Sa’ar 5. The 90 m ships are being procured at a cost of  approximately 110 million € each, with Germany funding a quarter of it. It will be equipped with the powerful MF-STAR AESA radar.

It is armed as heavily as a destroyer, which is expected as Israel cannot operate larger ships in its confined waters, and have to make the best out of their smaller ships. The Sa’ar 6 carries almost double the weaponry compared to the Sa’ar 5 and displaces an additional 800 tons. Its weapons package will include

In a move that will increase the already simmering tensions between Russia and the US, the USAF has deployed 4 of its most advanced fighter jets to Europe as a show of ‘support‘ for its European allies. The fighters touched down in Germany on 28/08 along with a C-17 Globemaster III. A total of 60 airmen have arrived with the aircraft.

Earlier, F-15s and A-10s had been deployed to counter the ‘Russian threat‘, but the deployment of such a formidable 5th gen fighter makes a powerful statement. According to the USAF Chief, the deployment was aimed at conducting exercises with NATO fighter jets in the region and for the F-22 pilots to familiarize themselves with the new terrain. Interestingly, this will be the first operational deployment of the F-22 in Europe.

The ‘unofficial’ reason behind the deployment would be the Raptor’s ability to penetrate sophisticated air defense systems such as the Russian S300 and S400. Russia is known to possesses powerful UHF radars which they claim, can detect stealth fighters several hundred km away and that its latest S400 air defense system has the ability to detect and engage stealth aircraft. Looking at it this way, the F-22 deployment seems more like a show of support than having any practical significance. Russia will respond by tightening its Integrated Air Defense System (IADS) and deploying fighters and interceptors of its own, which will likely lead to an unwanted rise in tensions in an already complicated environment.

For more details about the F-22 and its capabilities F-22 Raptor : The Story of The World’s Deadliest Fighter

Russia and China have concluded their large-scale naval exercise, “Joint Sea II”, in the Sea of Japan. The 5 day long event was aimed at improving inter-operability of the two navies by conducting anti-air/submarine/ship/saboteur exercises. However, the main focus of the exercise was to conduct amphibious landings of troops and vehicles and practice large-scale evacuation in a hostile environment.

The exercise involved a total of 22 ships, 20 aircraft and 500 marines from both sides. Russia was notably using its Cold War era ships which were commissioned around 30 years ago, whereas China sent its latest frigates and LPDs which are just a few years old. This exercise highlighted Russia’s inability to deploy a modern fleet of warships, as most of its construction programs are either moving at snail’s pace or are still on the drawing board. Meanwhile China is building warships at a phenomenal rate using the same Russian technology. However, these exercises are a sign of growing military ties between the two countries as they aim to counter the US presence in the Pacific.

It has been confirmed that India will receive 2 more Phalcon AWACS based on the Il-76 platform in a tripartite agreement between India-Russia-Israel. Earlier, 3 such systems had been delivered to the Indian Air Force and they were keen on acquiring 2 more. Now the 2 Il-76 aircraft have arrived in Israel and are undergoing conversion into AWACS. The powerful L-band Elta EL/W-2090 radar, which is an Active Electronically Array (AESA) Radar, will be fitted in a dome on top of the aircraft. Unlike a regular rotating antenna, it has 3 fixed antennae for continuous 360° coverage. Each aircraft can detect and track targets over 400 km away. Once delivered, the IAF will have a total of 5 Phalcon AWACS in addition to the 3 ingeniously developed ones based on the Embraer ERJ145 platform. 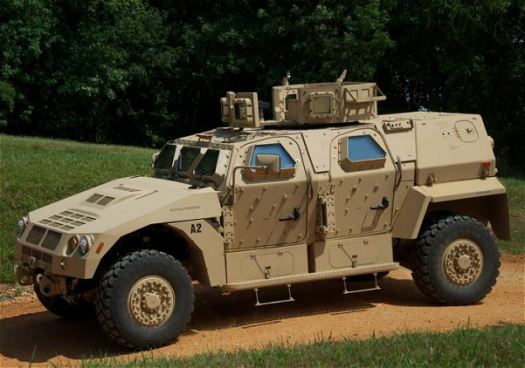 Oshkosh has won the 30 billion $ program to supply the US military with light, tactical vehicles. Dubbed as the JLTV, the program had many contenders like Lockheed , AM General, and Oshkosh. The US Military wanted a 7-8 ton tactical armoured vehicle, which provided the mobility of the 5-ton HUMVEE and the protection level of the 10-12 MRAP. The JLTV fits the bill perfectly and is highly airmobile, as it can be carried by CH-47/53 helicopters. This allows the US Army and Marines to deploy quicker in future conflicts and use a common vehicle for a variety of roles.

The Sukhoi T-50 PAK FA will get a complete range of new generation missiles which are tailored to fit inside its weapons bay. At MAKS 2015, the Tactical Missile Corporation (TMC) unveiled the Kh-59Mk2, which features a complete design change compared to its earlier variants. It has a boxy shape, similar to its European counterparts (KEPD and Storm Shadow) and the dimensions allow it to be fitted inside the weapons bay easily. This terrain hugging cruise missile will have an ‘official’ range of 300 km and i suspect the actual figure would be somewhere close to 500 km. It is primarily a land attack missile and uses inertial navigation along with radar and thermal homing seekers.

The other missile is the Kh-58UShKE, which is a mach 3.5+ anti-radiation missile with a range of 300+ km. It also has folding wings and control surfaces and is designed to fit in the weapons bay of the PAK FA. It has a passive radar seeker along with a thermal imaging seeker for accurate homing. Both these missiles can be used on older fighters of the Su-30 and MiG-29 series as well. The missiles are currently in the final stages of development will enter production by around 2017. They are just a small part of the whole new family of air-to-air and air-to-surface missiles which will are being developed for their 5th generation fighter.

After the contract to supply 2 Mistral class LHDs to Russia was broken off, France was left with 2 ships which it couldn’t afford to let rust and were trying their best to export them elsewhere. Now, Saudi Arabia, Egypt, and Malaysia are showing interest in acquiring these 200 m long , 21,000-ton amphibious assault ships which have the capability to carry 900 troops and 16 helicopters. Such ships are immensely useful for humanitarian, assault and sea control purposes when mated with the right equipment. It will be interesting to see the outcome as the procurement of such a ship will vastly enhance the capabilities of the relatively small navies of these countries.

For the first time ever, India and Australia will hold a comprehensive naval exercise, which will take place in the Bay of Bengal. The exercise, starting on September 12th, will focus mainly on submarine warfare and anti-submarine (ASW) operations, the most challenging part of modern warfare. The exercise looks to be aimed at countering the growing Chinese submarine presence in the Indian Ocean.

Australia will send a frigate ( Anzac Class), Submarine ( Collins class), a replenishment tanker and an AP-3 anti-submarine aircraft. India will be sending 4 warships along with its P-8I anti-submarine aircraft. The Indian ships are likely to be from the eastern fleet and could comprise of Shivalik class frigates, Kamorta class ASW corvettes, and Type 209 Shishumar class submarines.

Enjoyed reading this week’s news digest ? Rate it below and give us your valuable feedback!