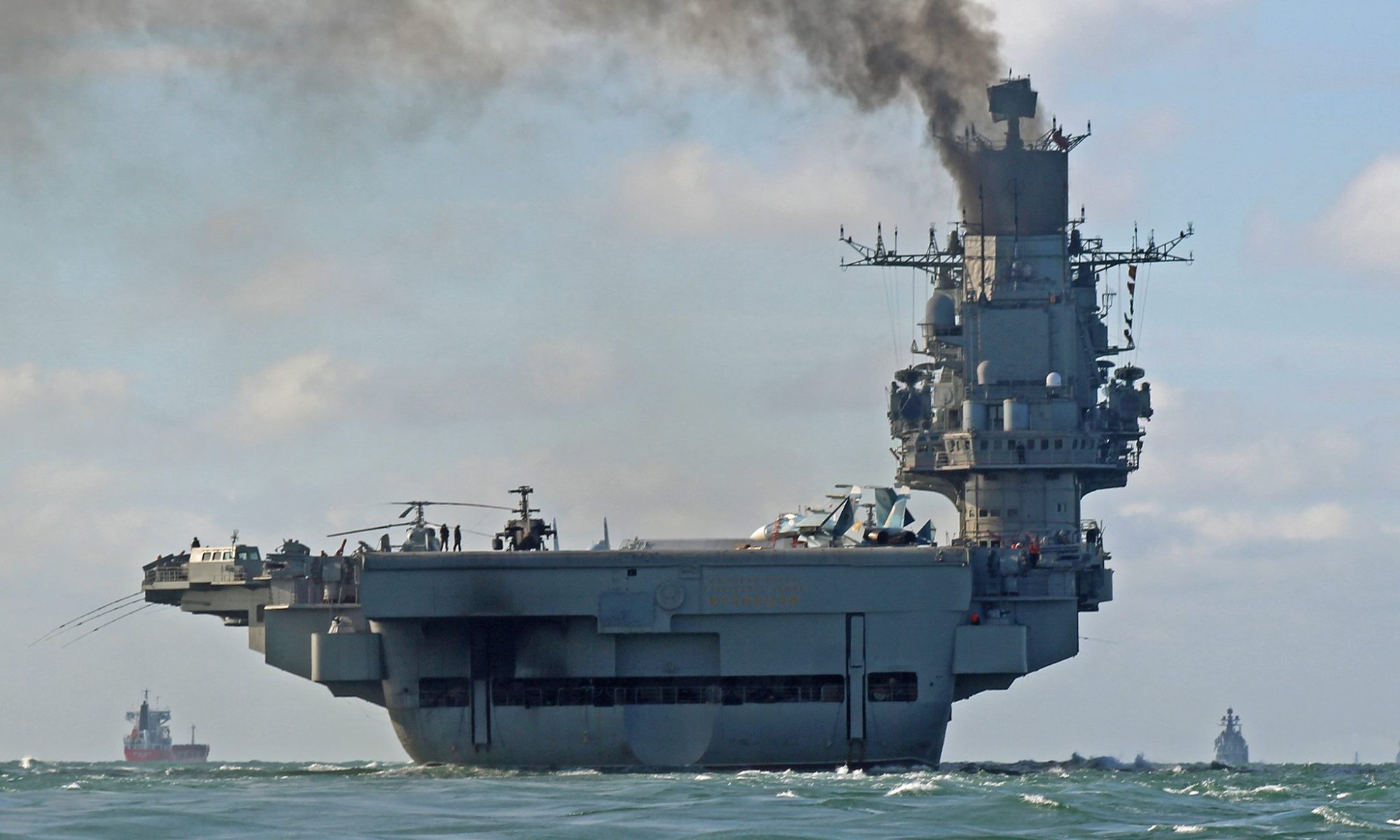 ‘Where’s the nearest carrier?‘ . This is a question associated with the US President, who is said to rely on the US Navy’s fleet of nuclear-powered supercarriers to respond to any military crisis that America would face. But would you associate the same question with the Russian president? Ummm, no. We could imagine Putin say ‘Where’s the nearest tug?‘ [‘Где ближайший буксира’]. This is because the Russian Navy’s carrier was pretty much a , spending most of its time at port, undergoing refits, repairs and deploying once in a while, belching black smoke, with a handful of fighter jets and a tugboat as its escort.

However, the jokes are all set to end, maybe for good, as Russia has sent its revamped carrier, the Admiral Kuznetsov on its first overseas combat deployment. This is not to be confused with the usual deployments of Kuznetsov to the Mediterranean as they were all peacetime ones and the aircraft were not sent on any combat mission whatsoever. But now, Kuznetsov is ready to carry out air patrols and strike missions in support of the Syrian and Russian forces embroiled in the war over there.

BIRTH OF A ‘ HEAVY AVIATION CRUISER’

Admiral Flota Sovetskogo Soyuza Kuznetsov [Адмирал флота Советского Союза Кузнецов] (“Admiral of the Fleet of the Soviet Union Kuznetsov”), as she is officially designated, was launched in 1985 in Nikolayev South Shipyard, in the erstwhile Soviet Union. It was supposed to be the first of a new class of Soviet 65,000 ton ‘Heavy Aviation Cruisers’ designed to provide air cover for the Soviet Navy battle groups and offensive firepower against hostile carriers.

It was commissioned in 1990 when the Soviet Union was in its twilight years. The collapse of the Soviet Union delayed the operationalization of the carrier to 1995, which was when the Russian Navy was putting its fleet back together. A second carrier of the same class called the Varyag remained incomplete, was later sold to China and now serves as the Chinese carrier Liaoning after a decade-long refit.

The Kuznetsov was built with a formidable electronics and weapons suite, which allow it to operate alone if needed. However, much of it has stayed the same since 1990 and is in need of a major upgrade. The current configuration is sufficient for self-defense and monitoring during its present deployment as it won’t be facing any missile or aircraft threats.

The electronics suite consists of

The defensive weapons suite consists of

It is clear that the Admiral Kuznetsov is well equipped in the sensor department, but has a ridiculous number of short-range air defense missiles. This makes it fully dependent on its air wing and escorts for long range air defense.

The Kuznetsov won’t be alone on its maiden combat deployment. It will be the flagship of a battle group, which will have 2 of the most powerful warships of the Russian Navy, the nuclear-powered cruiser Pyotr Veliky and the carrier itself, along with a collection of assorted vessels.

The carrier battle group will consist of the following ships

Each of these aircraft has been embarked on board with a particular role in mind. Russia is expected to use this opportunity to try out each of these platforms in combat as none of them have ever been deployed in a war zone. It will be interesting to see how they use the Ka-52K helicopters embarked on board. They were originally destined for the Mistral-class helicopter carriers which were to be purchased from France but denied at the last moment due to the Ukraine crisis. Lacking any other flattop, Russia is compelled to deploy them from its aircraft carrier itself. Here are some of the roles which the aircraft are expected to do.

Su-33K : Known for its long range and large payload, the naval flanker will primarily serve the fleet air defense role. It will be used for escorting, , and keeping a close eye on ‘friendly’ American spy planes and fighters who will be performing ‘routine’ patrols in the region. Since some of these flankers have been upgraded, I wouldn’t be surprised if they tried their hand at bombing as well. 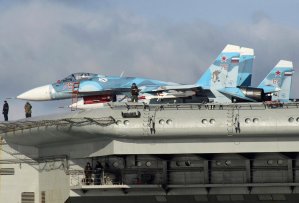 MiG-29K : Revived from near extinction by India’s interest in this multirole carrier-borne fighter, the MiG-29K is the Russian Navy’s newest toy. Being a small plane, a larger number of planes can be accommodated on board when compared to the larger Su-33K. The Mig can carry a variety of air to surface precision-guided bombs and missiles to perform strike missions over Syria.

Ka-52K : This is the first time that Russia has deployed a dedicated attack helicopter on a carrier. Armed with short-range missiles, rockets, 30 mm cannon and medium range anti-ship missiles, these helos could police the surroundings of the carrier and handle asymmetric threats easily. All I hope is that they won’t claim to have sent them for ‘humanitarian’ purposes. It is entirely possible that they will see shore deployments, operating with the Kuznetsov as a mobile base. 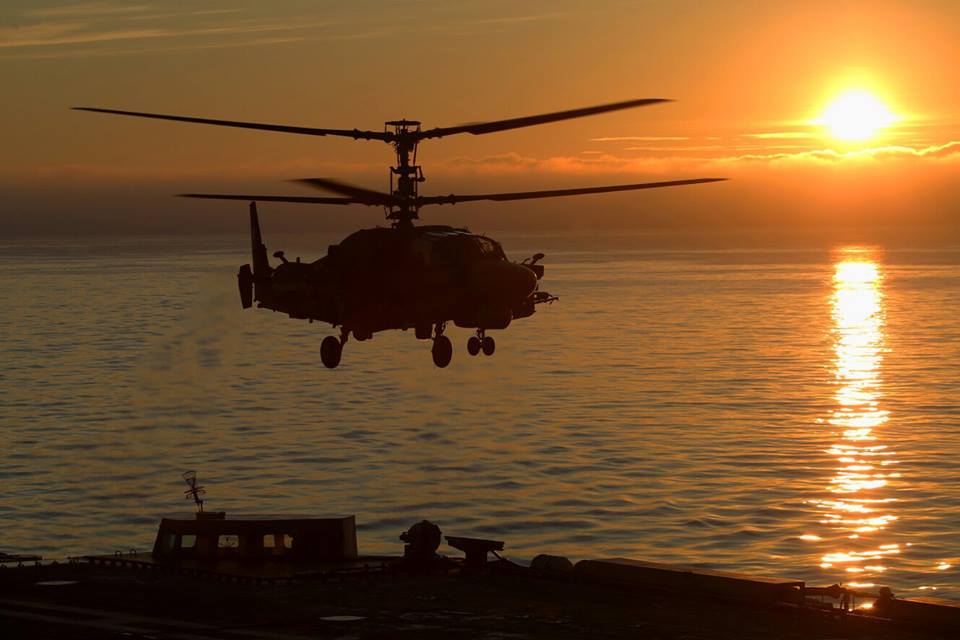 Ka-27 : This Kamov serves many roles primarily anti-submarine warfare, followed by search and rescue, plane guard and transport. Several of these helicopters are carried on board. Their chin mounted radar allows them to monitor surface threats and their dipping sonar will be used to keep an eye on curious submarines. There would be plenty of ‘Hide ‘n seek’ going on between these helos and ‘curious’ USN submarines.

Ka-31 : Since Russia lacks a fixed wing airborne early warning platform like the E-2 Hawkeye, they are dependent on the Ka-31 helicopter based AEW system. It has a foldable planar array radar, which rotates for 360 coverage. The biggest drawback is that the data has to be downloaded to the carrier for processing when compared to the onboard processing abilities of the E2. The Ka-31 also has a small endurance, but that is easily countered by carrying multiple helicopters and deploying them in succession. The biggest advantage of using them would be that the Kuznetsov can turn it’s radars off and maintain radio silence, while still getting the radar picture of the surroundings.

JOURNEY TO THE MEDITERRANEAN

Starting out in the Arctic region, the journey from Severomorsk to Syria was a long one. It sailed around Norway through the North Sea, passed within 100 km of London while sailing through the English Channel. It received a warm welcome from the Royal Navy who sent a Type-45 destroyer  and a Type 23 frigate to escort it. Then it passed by the French, Spanish and Portuguese coasts before entering the narrow Strait of Gibraltar and into the Mediterranean. It is presently in the Mediterranean Sea, on the way to Syria.

There was a lot of publicity from Russian, European and American media houses as it is not often that anyone gets to sight a Russian carrier battle group heading for war. Also, there was a tweetstorm happening on Twitter, where both the Russian and British militaries were trolled. Have a look at some of them.

Latest photo of #Kuznetsov passing through the English Channel. pic.twitter.com/rg5abv2dSX

All I can say is, Twitter is ruthless. Whether you are an American, British, Russian, French, Indian or Chinese, you won’t be spared. Nowadays, the militaries of Russia, Britain and the US are giving plenty of ammunition to the Twitter army by botching up things.

Being a conventional carrier with a ski-jump to launch its aircraft, there will be a lot of obstacles during a long-term combat deployment. Let us look at how it stacks up against the French and American carriers which are operating in the same region. 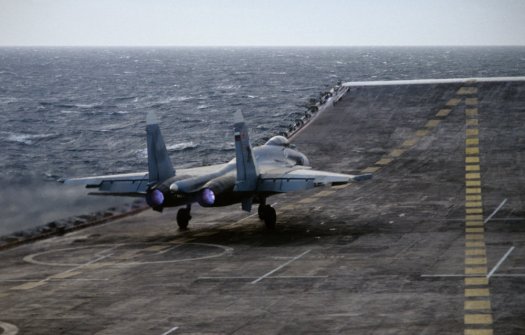 As you might have already guessed, this deployment is more of a show of strength and defiance rather than practical utility. Basically, the whole fleet (except the submarine) is can be considered vintage, as they are from the Soviet era. It actually feels as if the Soviet Union is going to battle in Syria as the Russian Navy’s modernization plans for its surface fleet haven’t taken off well, with lack of funds being their achilles heel. Though the ships in the battle group are numerous, they do not have a fraction of the power projection capabilities of a US Navy battle group.

Russia badly wants to change this by introducing advanced warships such as the Admiral Gorshkov class frigates with excellent land attack and air defense capabilities, but they aren’t able to build as many as they want, as quickly as they need. They still have to depend on the tiny Buyan-M missile boats to launch land attack cruise missiles as none of the enourmous ships in this battle group can do so! This deployment will however serve as a learning experience for them, and we can expect similar such deployments in the future, with the oldies being progressively replaced by modern and more capable warships if things go according to their plans.

I would like to thank my friend #Epslilon of BattleMachines for helping me with the fleet upates. Now let us finish off with a popular meme that will bring a smile to your face 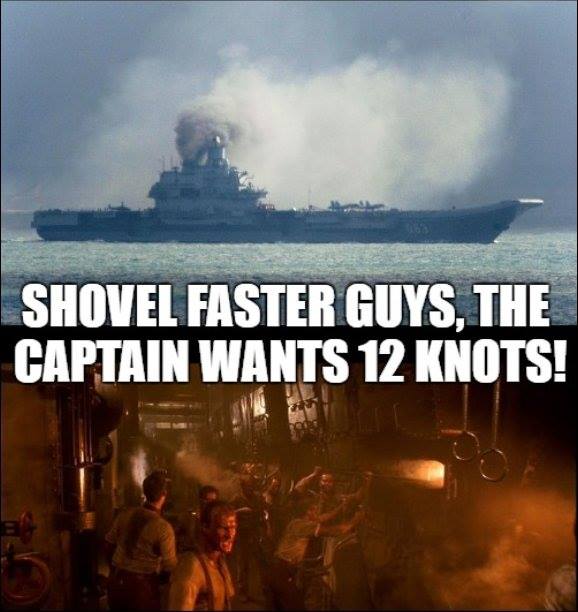 If you enjoyed reading this article, do rate it below!