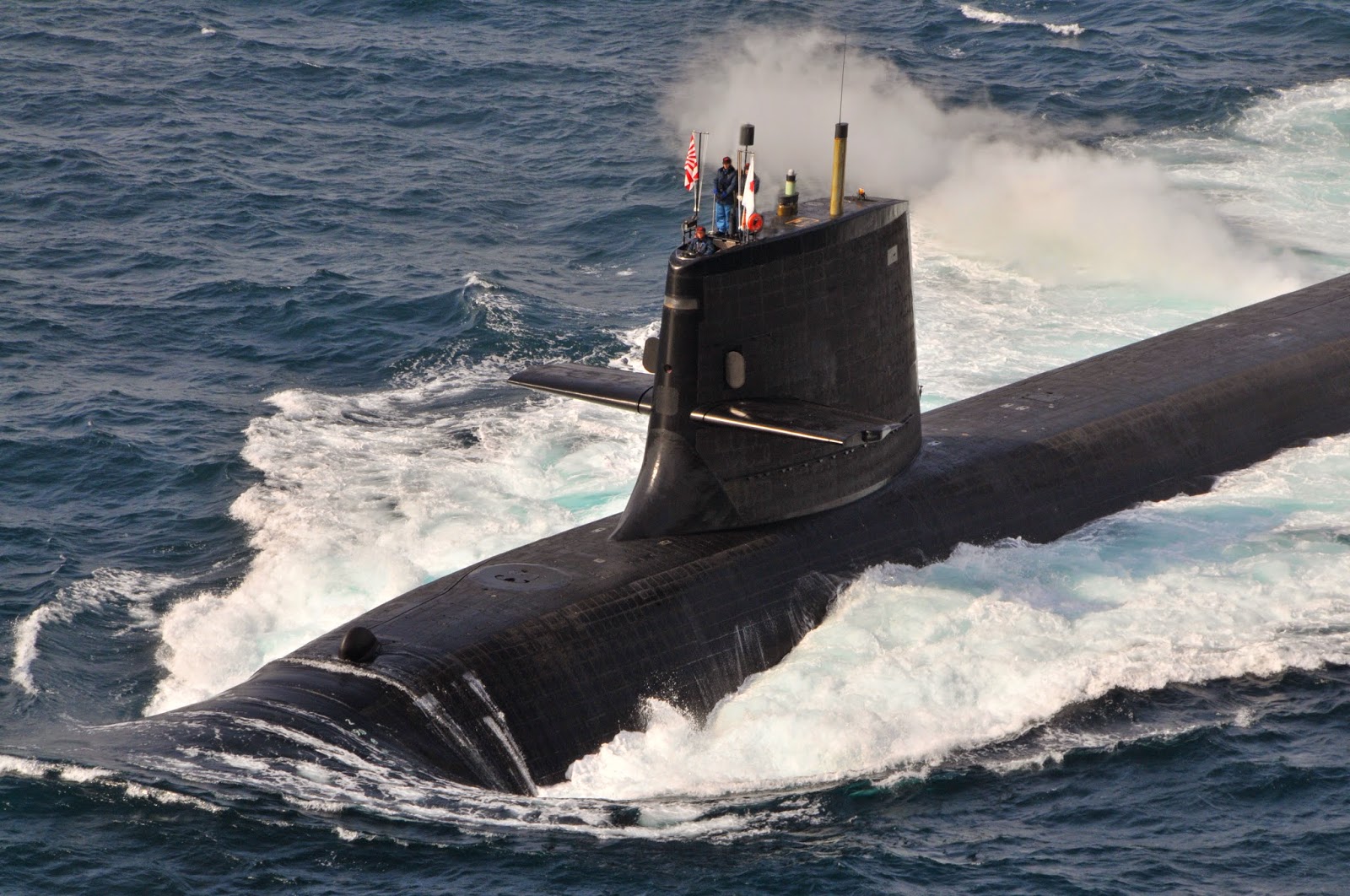 That is the reason we see a large number of navies queuing up to buy or build submarines with AIP systems. The best part is that AIP technology can be installed on existing older generation submarines by inserting a new hull section during a retrofit. This article will deal with the working, advantages, disadvantages and application of AIP in modern submarines.

As their name suggests, Diesel-Electric submarines run on diesel and electricity. They have a large network of batteries which are charged by the diesel generator. They snorkel, which means, travelling just below the surface of the water with the periscope and the diesel generator exhaust pipe above the water surface. Once they charge their batteries, they dive into the ocean and run silently on battery power with the diesel generators shut down. After running for a few days underwater, the battery gets drained and these submarines have to surface again to recharge their batteries. Diesel-Electric submarines are also referred to as SSK (Sub Surface Hunter-Killer) by US Naval designation or popularly called as diesels.

Why do we need AIP ?

While underwater, the batteries on board power the propeller and other electrical systems on board the submarine. These batteries run out of charge within 4-5 days and the sub needs recharge them. This is done by snorkeling, which exposes them to detection by enemy radars and makes them an easy target for hostile anti-submarine assets. Although modern snorkels are coated with radar absorbing paint and have a stealthy shaping, they are still detectable by high resolution radars. There are also sensors called diesel sniffers which can detect the exhaust emissions of the submarines diesel generators while snorkeling. A submarine which needs to surface every day, loses its element of surprise and increases its vulnerability to hostile anti-submarine assets.

Hence we need a system which can allow diesel-electric submarines to recharge their batteries without running their engines. This will allow them to continue sailing underwater and retain the element of surprise by remaining undetected. The system should also allow the SSKs to retain their extremely low noise signatures and should not compromise on the performance of the submarine. The system which permits all this is Air Independent Propulsion (AIP).

Although nuclear submarines offer far better endurance and speeds, they are unsuitable for the shallow littoral waters and most navies cannot afford to build and maintain them as they are very expensive. Also diesel submarines possess the advantage of being able to switch off thir engines completely and lie in wait unlike nuclear submarines whose reactors cannot be switched off at will. This combined with the ultra-quiet nature of modern diesel subs, has made AIP-equipped diesel subs a very attractive alternative for many countries. Many countries are operating both nuclear and diesel-powered submarines for their respective advantages. Navies who wish to operate non-nuclear subs with long-range and large weapons payload are now option for large diesel submarines equipped with AIP, which provide the closest alternative to nuclear powered submarines. Some examples are the Soryu class of Japan, Type 216 being developed by Germany and the Shortfin Barracuda of France which will be operated by Australia.

Closed Cycle Engine : A heat engine in which the working substance is continuously circulated and does not need replenishment.

Steam Turbine : A type of turbine in which a high velocity jet of steam is used to turn the turbine blades which in turn rotates the shaft. The shaft can be connected to an alternator to generate electricity or to a propeller to move a ship/submarine.

Working fluid : It is a pressurized gas or fluid that is used to absorb/transmit energy in a thermodynamic system.

Scrubbing : The process of removing certain gases from the exhaust by the usage of appropriate chemicals in a scrubber.

The types of AIP systems are

This technology involves storing a supply of oxygen in the submarine in order to run a diesel engine while submerged. Liquid oxygen (LOX) is stored in tanks on board the submarine and sent to the diesel engine for combustion. Since they need to simulate the atmospheric oxygen concentration for the engines to run safely without getting damaged, the oxygen is mixed with an inert gas (usually argon) and then sent to the engine. The exhaust gases are cooled and scrubbed to extract any leftover oxygen and argon from them and the remaining gases are discharged into the sea after being mixed with seawater. The argon which is extracted from the exhaust is again sent into the diesel engine after being mixed with oxygen.

The main challenge with this technology is the storing of liquid oxygen safely on board the submarines. The Soviet subs which used this technology during the 1960s found them to be highly prone to fires and subsequently discontinued their usage. Closed Cycle Diesel AIP is hence not preferred for modern submarines even though it is comparatively cheaper and simplifies logistics by the use of standard diesel fuel.

Steam turbines make use of a source of energy to heat water and convert it into steam in order to the run the turbine. In nuclear powered submarines, the reactors provide the heat in order to convert water into steam.  But in conventional closed cycle steam propulsion, a non-nuclear energy source is used to do the same. The French MESMA (Module d’Energie Sous-Marine Autonome / Autonomous Submarine Energy Module ) is the only such system available and it makes use of ethanol and oxygen as energy sources. The combustion of ethanol and oxygen under high pressure is used to generate steam. The steam generated is the working fluid and is used to run the turbine. The high pressure combustion allows the exhaust carbon dioxide to be expelled outside into the sea at any depth without making use of a compressor.

The advantage of MESMA is it’s higher power output when compared to the alternatives which allows higher underwater speeds but it’s major drawback is it’s lower efficiency. Also the rate of oxygen consumption is said to be very high and these systems are very complex. These drawbacks make several navies opt for sterling cycle and fuel cell alternatives.

A Sterling Engine is a closed cycle engine with a working fluid which is permanently contained in the system. A source of energy is used to heat this working fluid, which in turn moves the pistons and runs the engine. The engine is coupled to a generator, which generates electricity and charges the battery. The source of energy used here is typically LOX as oxidizer and diesel fuel, which is burnt in order to generate heat for the working fluid. The exhaust is then scrubbed and released into the seawater.

The advantage of using Sterling engines is the easy availability of diesel fuel and low refueling costs when compared with Fuel Cells. They are also quieter than MESMA and hence preferred by the Japanese for their Soryu class, Sweden for their Gotland and Västergötland class and China for their Yuan class.

A Fuel Cell is a device which converts chemical energy into electricity. This is done using a fuel and an oxidizer. A typical fuel cell converts Hydrogen (fuel) and Oxygen (oxidizer) into electricity, with water and heat released as by-products. This is done by an electrolytic cell which consists of two electrodes, one positive (anode) and the other negative (cathode), separated by an electrolytic barrier. The reaction between the cathode and anode produces an electric current, which is used to charge the batteries. A chemical catalyst is used to speed up the reactions.

Fuel cells are the most advanced and preferred AIP technology today. This is because of the major advantages they offer in stealthiness and power generation. They contribute to the stealthiness of the sub as Fuel Cells have almost no moving parts, which significantly reduces the acoustic signature of the sub. Fuel Cells can achieve an efficiency of over 80% under certain circumstances. They can also be scaled easily into large or small sizes depending on the displacement of the submarine. This is easier than developing different systems for each submarine class. Hydrogen Fuel Cells are also very environment friendly as they generate no exhaust fumes, which in turn eliminates the need to have special exhaust scrubbing and disposal machinery. The only drawback is that they are expensive and complex.

The use of AIP on a diesel-electric submarine, greatly increases their underwater endurance, allowing them to continuously stay submerged for weeks without surfacing. Although the submarine eventually needs to surface to charge its batteries and their endurance is nowhere on-par with nuclear powered submarines, the vast increase in endurance offered by AIP gives them an advantage over non AIP equipped diesel-electric submarines. However AIP doesn’t give any advantage other than increased underwater advantage and it should not be assumed that AIP-equipped submarines will always defeat their non-AIP equipped counterparts.

In April 2006, a German Navy submarine U-32, equipped with a Siemens proton exchange membrane (PEM) compressed hydrogen fuel cell AIP, made a 2800 km uninterrupted underwater journey without surfacing/snorkeling! This is in stark contrast to non-AIP equipped submarines which can cover only 500-800 km before they have to surface and recharge their batteries by running noisy diesel generators. Comparatively, a nuclear-powered submarine has  unlimited underwater endurance!

Again in 2013, U-32 set a record by traveling underwater continuously for 18 days without surfacing! Comparatively, a non-AIP diesel sub has an underwater endurance of just 4-6 days before it has to surface. This shows that AIP-equipped diesel-electric submarines are far more capable than their non-AIP equipped counterparts when it comes to endurance.

AIP Usage Around The World

As of 2016, the following countries have developed their own AIP systems to be fitted on submarines.

The advantage offered by increased underwater endurance can be used for ‘ambushing’ an approaching fleet. In one such scenario, an AIP equipped submarine can roam near a strait, waiting for its target to approach. The sub will be running at ultra-quiet speeds of 2-4 knots for several weeks and then attack the target when it appears, using its torpedoes. Even though a non-AIP equipped sub can do the same thing, it’s waiting period, which is very essential for an underwater ambush, is significantly lesser.

In another scenario, an AIP equipped sub can roam near enemy territory for far longer compared to a non-AIP sub. Thus in this situation where intelligence is gathered and spy missions are performed, AIP gives these quiet diesel subs an advantage by allowing them to loiter for weeks without the need to surface.

The thing to remember about AIP is that just because a submarine is equipped with that technology, it wont necessarily use them on every deployment. During regular patrols or in friendly territory, an AIP equipped submarine will snorkel often to recharge its batteries. Only when it is deployed operationally will it make use of AIP to increase its underwater endurance. This is because most of the fuels, oxidizers and other consumables used in AIP are quite expensive and it would not be economical to replenish them on a monthly basis.

The capacity and reliability of batteries is increasing due to extensive research being conducted in that field. The various AIP technologies mentioned will also see large-scale improvement in capabilities. These two technologies combined, will allow AIP equipped submarines of the future to stay underwater for months at a time and make them pseudo-nuclear submarines. This technology has a bright future and we will see more modern navies adopting it for their diesel-electric submarine fleets.

Enjoyed reading the article? Do rate it below.